Aki Toyosaki is a Japanese voice actress, singer and actress. She plays Kokoro Akazaki in the IDOLY PRIDE series.

Aki Toyosaki was born in Tokushima, Japan, on October 28th, 1986. She made her major debut in 2007 playing as the lead character Amuro Ninagawa in Kenkō Zenrakei Suieibu Umishō and as Su in the Shugo chara anime. Since her major debut, Aki has gone onto play more major roles and has won a couple of awards in 2010 and 2011. 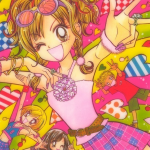