This article is about the franchise. For the anime series, see IDOLY PRIDE (Anime). 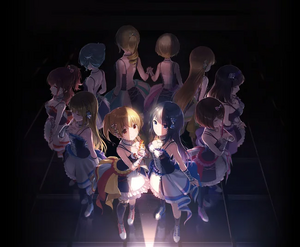 "No one starts from the spotlight. They all start as a nobody. Only way there is to prove that she is a true idol."

IDOLY PRIDE (アイドリープライド) is a multimedia idol project co-produced by CAAnimation and Lerche. The project was officially revealed on November 27, 2019. The franchise includes live events, music releases, a TV anime series and manga, in addition to a video game. The anime series aired during the Winter 2021 season.[1]

A small entertainment company, Hoshimi Productions, based in Hoshimi City, produces one of the rising stars of the idol industry: Mana Nagase. A few years later, Hoshimi Productions holds an audition to find a new idol. Kotono Nagase, the younger sister of Mana, appears on stage along with Sakura Kawasaki, a girl with a voice just like Mana's. Starting with just Kotono and Sakura, and later totaling to a group of 10 girls, they all gather and start living together in a dormitory. The story also features TRINITYAiLE, who want to surpass Mana, in addition to LizNoir, who have an extraordinary rivalry with Mana.

Standing up to each other and competing with the pride in their hearts, they aim for their best as the emotions surrounding Mana and the rivalry become entangled.

IDOLY PRIDE Stage of Asterism is a manga and web manga adaptation of IDOLY PRIDE, with character designs by manga artist Hiroki Haruse and original story by Project IDOLY PRIDE.

There are four groups and one soloist from IDOLY PRIDE.

Community content is available under CC-BY-SA unless otherwise noted.
Advertisement