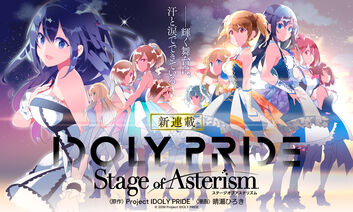 IDOLY PRIDE Stage of Asterism is a manga and web manga adaptation of IDOLY PRIDE, which began serialization on June 10, 2020. It is created by manga artist Hiroki Haruse.

The first physical volume was released on January 15, 2021.

"The shining stage is made of sweat and tears".

Hoshimi Productions is a small entertainment company in the suburbs of Kanto. Ten newcomer idols, each with their own goals, aim for the top of the idol world. Three companies, QualiArts, Music Rain and Straight Edge, in addition to art by Hiroki Haruse, have made a comic book version of the large-scale idol project 'IDOLY PRIDE'! This is the story of hot and sad idols who run through their adolescence with big dreams and harsh realities in front of them.

Community content is available under CC-BY-SA unless otherwise noted.
Advertisement